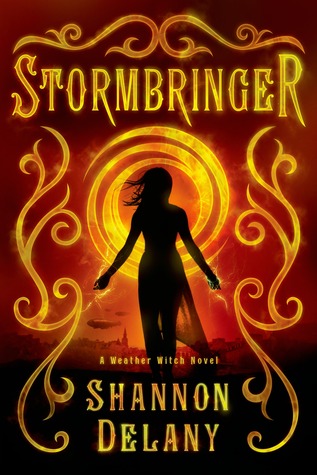 Synopsis: In the intrigue-filled follow up to Weather Witch, Jordan Astraea, once a young Philadelphia lady of good social standing, is now in the final stages of her brutal training to become a Conductor—the Weather Witch who serves as a living battery to keep the massive airliner Artemesia aloft. Meanwhile, Rowen, determined to rescue her after losing his only other true friend and being wanted for murder, has found himself forced aboard a much different air vessel, this one manned by a dangerous crew and carrying a cargo so treasonous, that, if finding its destination, will herald a storm of revolution for the still young United States.

With a spirit for adventure, romance, fantastic world building and cunning imagination, Shannon Delany delivers the sensational follow up to Weather Witch in the second book of the trilogy.

If you saw my review last week, you already know that I absolutely adored the first book in this series, Weather Witch. It was exciting and the characters were interesting and I loved the world-building sooooo much. The ending, however, was a bit of a cliffhanger, so I’m really anxious to get my hands on the sequel and find out what happens next.