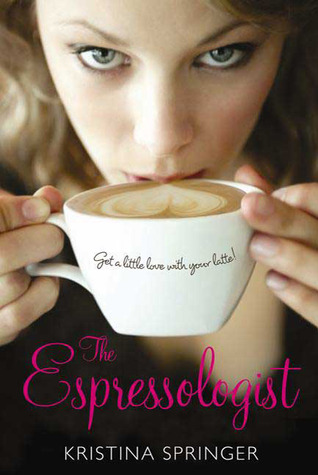 How I got it: Local used bookstore

Summary: What’s your drink of choice? Is it a small pumpkin spice latte? Then you’re lots of fun and a bit sassy. Or a medium americano? You prefer simplicity in life. Or perhaps it’s a small decaf soy sugar-free hazelnut caffe latte? Some might call you a yuppie. Seventeen-year-old barista Jane Turner has this theory that you can tell a lot about a person by their regular coffee drink. She scribbles it all down in a notebook and calls it Espressology. So it’s not a totally crazy idea when Jane starts hooking up some of her friends based on their coffee orders. Like her best friend, Em, a medium hot chocolate, and Cam, a toffee nut latte. But when her boss, Derek, gets wind of Jane’s Espressology, he makes it an in-store holiday promotion, promising customers their perfect matches for the price of their favorite coffee. Things are going better than Derek could ever have hoped, so why is Jane so freaked out? Does it have anything to do with Em dating Cam? She’s the one who set them up! She should be happy for them, right?

With overtones of Jane Austen’s Emma and brimming with humor and heart, this sweet, frothy debut will be savored by readers.

I had fun with it, even if it wasn’t what it could’ve been. I would’ve liked it a lot more if Jane had been a bit less of an airhead.

Maybe to a younger teen

One thought on “Flash Review: The Espressologist by Kristina Springer”

What do you think? Cancel reply